During the European Utility Week in Paris on 12th-14th of November, the INVADE project presented itself in a unique way in the EU Projects Zone. Using videos and an informative quiz, the INVADE stand was always busy.

To stand out in the EU Projects Zone at the European Utility Week 2019 (EUW19), the INVADE partners decided to try something new this year. By offering all passing visitors to watch the INVADE pilot videos on an iPad with their own headset, followed by a quiz about the project, the INVADE stand became highly popular among the participants.

“It was a great success! More than 60 people watched the videos and finished the quiz, and our booth was never empty,” says Dieter Hirdes, Project Manager of INVADE and Head of R&I at Smart Innovation Norway. 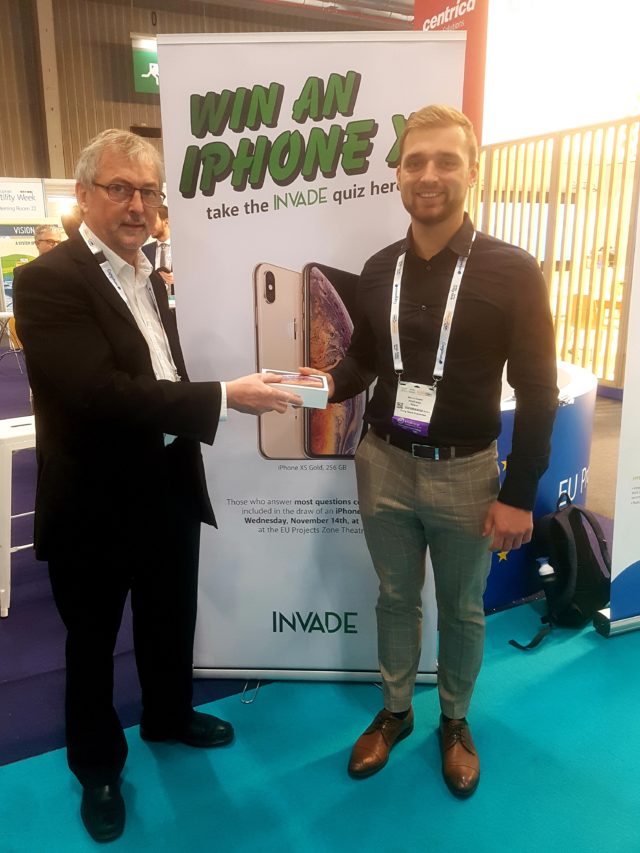 The project had invested in three iPads and three pairs of headsets to make sure that as many people as possible would get the chance to learn more about INVADE and answer questions.

To make the contest even more interesting, two large roll-ups announced that the winner would win a brand-new iPhone XS. On the last day of the event, the contestants with the highest number of right answers were included in a draw of the prize. Project Manager Hirdes announced the winner as Mr. Marcin Dolata, an Energy Transition MSc Student at EIT InnoEnergy Master’s School.

“It was a great experience. I learned about the INVADE pilots and I found them incredibly interesting. In all the cases, users of the INVADE solution could notice a significant improvement of energy efficiency or demand flexibility by implementation of energy storage and smart energy management systems,” comments the winner himself.

Dolata explains that a friend of his, an alumnus of his master’s program who worked on the project, told him about INVADE. He was intrigued and wanted to learn more.

“The quiz with a nice prize was an attractive and pleasant way to get more information about the INVADE project, so I did not hesitate to take part in it,” says Dolata. He continues:

“The project is really impressing. The pilot installations prove positive impacts of using the INVADE platform, such as reduction of energy costs, improvement of local grid stability and the optimal usage of existing infrastructure. All the partners look proud of being part of this innovative project and are satisfied with the achieved results.”

The MSc student found the idea and form of the contest to be breath of fresh air and appreciated the short, concise and clear pilot videos.

“The questions encouraged to pay attention and understand the content. Moreover, the headphones helped to mute the surrounding noise and fully focus on the videos. I’m sure that all the participants learned a lot about the INVADE project,” concludes Dolata.

@CIT_UPC : RT @CIT_UPC: This is INVADE Project, finalist at #enerTICAwards: Integrated electric vehicles and batteries to empower distributed and cent… ( - 3 years ago)

It is possible to control the speed of charging electric cars on a large scale with algorithms. This can be concluded from the results of a Smart Charging test on 700 public charging stations as part of the Horizon 2020 INVADE project. (3 years ago)

@INVADEH2020 : It is possible to control the speed of charging electric cars on a large scale with algorithms. This can be conclud… https://t.co/uZfecsyaOR ( - 3 years ago)

During the European Utility Week in Paris in November 2019, the INVADE project presented itself in a unique way in the EU Projects Zone. Using videos and an informative quiz, the INVADE stand was always busy. (3 years ago)

The Horizon 2020 INVADE project is coming to an end this year. Last week, a conference and a workshop were organized on behalf of the project and parallel to event Smart City Expo World Congress in Barcelona. (3 years ago)

@INVADEH2020 : The Horizon 2020 INVADE project is coming to an end this year. Last week, a conference and a workshop were organize… https://t.co/zjAjEXjolW ( - 3 years ago)

@rgallartf : RT @rgallartf: The catalonian pilot did share its results during the visit of the Technical Advisory group in its Granollers headquarter de… ( - 3 years ago)